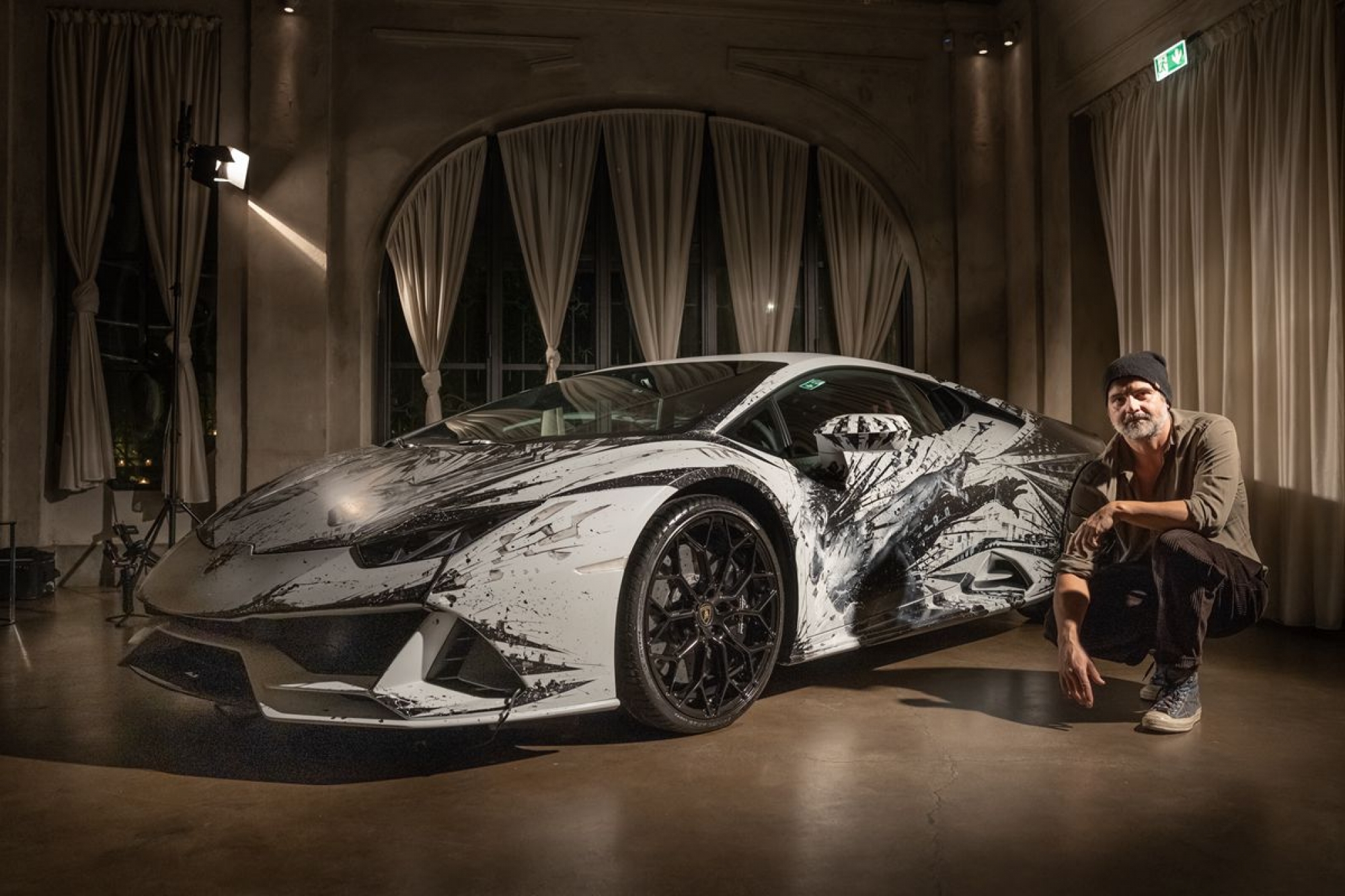 Unveiling in Milan of the work “Minotauro”: dynamism, power, and emotions expressed by finger painting on the car’s bodywork

Sant’Agata Bolognese/Hong Kong, November 9, 2021 – Yesterday evening, at La Bullona in Milan, the artwork known as “Minotauro” (Minotaur) was unveiled: myth, body of a man and bull, expressed in painting on the bodywork of a Huracán EVO.

The work is an expression of the dynamism, power, and innermost emotions that the artist experienced while driving the Huracán EVO, portrayed through the powerful features of a man’s body created by Paolo Troilo’s fingertips.

Paolo Troilo’s constantly-evolving painting uses the representation of the male body as its defining element and a means of communication. The work, entitled “Minotauro”, owes its name to the mix of emotion and meaning that the artist experienced when he encountered Lamborghini.

“It was inspiring to meet Paolo Troilo and his artistic expressiveness. In our company we are accustomed to art and the way it has always influenced our cars,” commented Christian Mastro, Marketing Director at Automobili Lamborghini. “However, when our product and the emotions it brings come together with the sensibilities of an artist like Troilo, something different and exceptionally unique like ‘Minotauro’ is created, and we are very proud of this.”

The artist pays homage to the Huracán EVO by depicting a fusion between man, the bull symbol of Automobili Lamborghini, and the concept of myth expressed in the indomitable – supernatural and almost animalistic – force exuded by the man’s figure painted on the sides of the car. The strength communicated by forearms and the clenched fists on the front hood are reminiscent of a bull’s horns.

“Time. I am enamoured with the idea of slowness, and I have always championed it as a key to pleasure, culture, beauty and success. But there are some encounters that change you,” explained Paolo Troilo, creator of the work. “ Seeing the Lamborghini Huracán EVO and trying it out suggested to me that there are also things capable of releasing the same energy with acceleration, with speed, with momentum. I heard the sound of the wind picking up as the space narrowed and time distorted: I felt a flowing wind and used it to paint on the muse itself, the inspiration of these emotions: the Huracán, my Minotauro.”

From November 4 to 13, the Huracán EVO painted by Paolo Troilo together with some of the artist’s other works will be on display at Palazzo Serbelloni at Corso Venezia, 16 in Milan, as part of the “TROILO-MILANO SOLO ANDATA” (TROILO-MILAN ONE WAY) exhibition, curated by Luca Beatrice.

Paolo Troilo was born in Taranto on March 27, 1972, son of Antonio and Lucia Troilo.

His considerable talent was evident even at the age of seven through his drawing, which his mother lovingly nurtured by always leaving sheets of paper and pencils lying around the house.

His father, an anaesthetist, soon began to commission him to produce illustrations of pathological anatomy to be shown at medical conferences.

Paolo studied at the European Institute of Design in Rome, then Arts and Architecture at the University of Florence, but he never finished any of these studies because he was eager to work in advertising.

In 1997 he moved to Milan and started his illustrious career in this sector.

The path to success started with the prestigious Saatchi & Saatchi, which led to him being nominated Best Italian Creative Director in 2007 with the presentation of the Grand Prix of the Italian Art Directors Club.

If we had to give a date for the beginning of his artistic career, it would probably be April 2005 when, while still working in advertising, he decided to switch from drawing to the noble art of painting.

However, the day he started gathering together the materials he needed to make that leap, he forgot to buy brushes. This is the “mistake” that gave us his technique; the need to express himself at all costs became a virtue.

He started painting with his fingers and this technique, together with the powerful figurative results, make him unique.

In 2009 he left advertising to follow his passion for painting. In 2011 he was selected for the 54th Venice Biennale. In 2013 he became an independent artist, leaving all the art galleries that represented him to pursue his own path with the help of patrons.