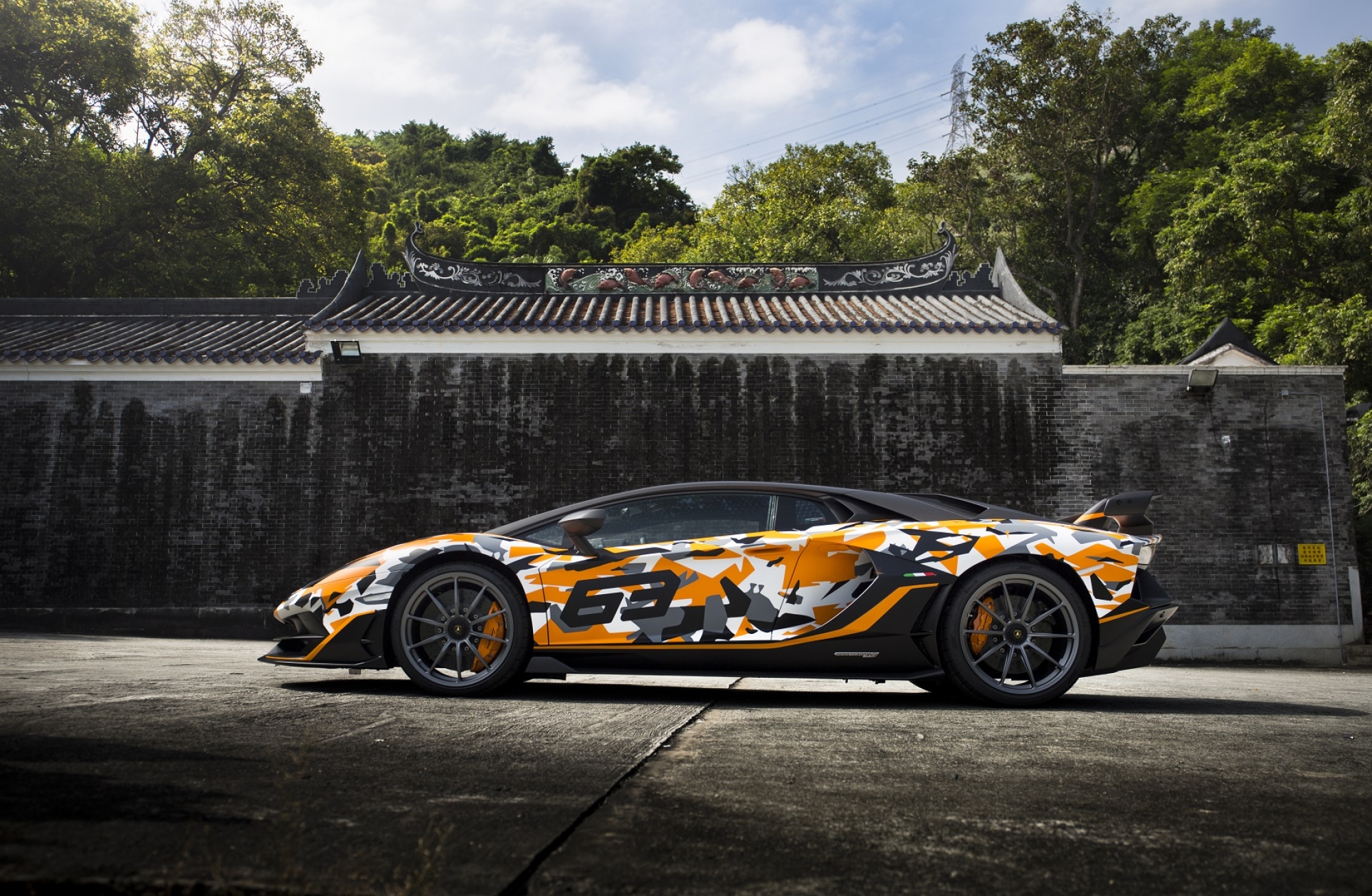 Hong Kong, 30 October 2020 – The Lamborghini Aventador SVJ 63 Coupé is a limited edition with only 63 worldwide. It is a tribute to Lamborghini’s founding year of 1963. This highly-exclusive masterpiece has been delivered to its lucky owner by Kingsway Cars Limited, the sole authorized distributor for Automobili Lamborghini in Hong Kong.

This particular masterpiece is one of the unique samples of the Aventador SVJ 63 Coupés allocated for the Hong Kong market. Exuding its owner’s personal style which combines imagination and sophistication, this Aventador SVJ 63 Coupé is a one-off that features the camouflage livery in custom-requested matte finish. It is a tribute to the camouflaged Lamborghini Aventador SVJ that set the production car record on the Nürburgring Nordschleife circuit with a time of 6:44.97 in 2018.

The Aventador SVJ 63 demonstrates Lamborghini’s innovative design and engineering competencies. Differentiating this limited edition from normal SVJs, the windshield frame, roof, engine bonnet, fixed air intakes, side mirrors and spoilers are all finished in exquisite visible matte carbon fiber. In addition, three exclusive “63” liveries can be found on both doors as well as the front bonnet. All these details deliver an outstanding visual effect and further accentuate the unmistakable silhouette of the Aventador SVJ 63.

This truly astonishing Aventador SVJ 63 is one of the most unique masterpieces ever commissioned through Lamborghini’s Ad Personam program. With limitless color and trim combinations offered by Ad Personam, the car’s owner is able to fully infuse his personality into his dream machine.

As a generous gesture of support from the prestigious owner, this Aventador SVJ 63 Coupé with camouflage livery painted in matte finish will be on display in Lamborghini Hong Kong Showroom at G/F., 1A, Star Street, Wanchai, from 4 Nov, 2020 for a short period of time.

Improved performance in all aspects
The Aventador SVJ’s Nürburgring-Nordschleife lap record is a living proof of its benchmarking performance. With its optimized power plant making it the most powerful series production V12-engined car produced to date by Lamborghini, the SVJ features an increase in power to 770 hp (566 kW) at maximum 8,500 rpm. The SVJ outputs 720 Nm of torque at 6,750 rpm, while a dry weight of just 1,525 kg gives the SVJ a weight-to-power ratio of 1.98 kg/hp. The SVJ accelerates from standing to 100 km/h in 2.8 seconds and from 0 to 200 km/h in 8.6 seconds. A top speed of more than 350 km/h is complemented by a braking distance of 100 km/h to 0 in 30 meters.
This Aventador SVJ is, however, more than a super sports car achieving the top numbers. The development philosophy of the Aventador SVJ and its very essence in terms of design, aerodynamic technologies and efficiency, weight-to-power as well as performance, is to create a demanding driver’s perfect car.

From the front the car is wider: a new front bumper with integrated side fins features a new air intake and highlights the inclusion of Aerodinamica Lamborghini Attiva 2.0 (ALA 2.0), Lamborghini’s patented active aerodynamics technologies.

The disconnected front splitter continues the impression of a floating component, while providing a channel for airflow. A tri-dimensional air outlet on the hood directs airflow, improves both drag and downforce, and clearly alludes to the aerodynamic purpose of the SVJ’s design. The upper body aerodynamic optimization has contributed 70% to the total downforce improvement in the SVJ over the SV.

The SVJ’s rocker is entirely new, adopting the ‘Y’ theme found in Lamborghini cars while also resembling shapes found in jet fighters. The bigger side air intakes and the new front side fins reduce drag and improve overall cooling. An improved underbody aero design with vortex generators works in conjunction with front diffusers and a new, extreme-design rear diffuser, together with divergent fins, contributes 30% to the total downforce improvement.

The rear wing of the SVJ has been designed for best aerodynamic efficiency, based on a new air foil; an optimized ALA 2.0 system; and side winglets to reduce turbulence while providing high downforce on the straight as well as in high speed corners.

At the rear of the car the position of the high-mounted naked exhaust resembles those found on extreme motorbikes, as well as saving weight due to its proximity to the engine: the exhaust system itself is also lighter. The Omega-shape rear bumper incorporates a massive new diffuser that contributes to downforce, while a new high-mounted rear wing is produced entirely in carbon fiber with its integrated ALA 2.0 system.

The new rear engine bonnet has been redesigned for the SVJ: it is made from lightweight carbon fiber and removable via quick release clips in a reference to motor racing. It also adopts the ‘Y’ theme that reveals the updated V12 power plant below, while accenting the car’s high performance characteristics. Super-light ‘Nireo’ aluminum rims are designed specifically for the SVJ, saving weight and contributing to the extreme dynamism of the car. Optional ‘Leirion’ aluminum rims with ‘Y’ and hexagonal details are also available. The Italian flag detail on the side wing is a reminder of the Lamborghini’s Italian super sports car heritage.

Aerodinamica Lamborghini Attiva 2.0 (ALA 2.0)
Lamborghini’s patented ALA system was first seen on the Huracán Performante, and has been developed to an enhanced level for the Aventador SVJ, now ALA 2.0, including new optimized air inlets and aero channel designs. The system has been re-calibrated taking into account the enhanced vehicle’s lateral accelerations.

The ALA system actively varies aero load to achieve high downforce or low drag, depending on dynamic conditions. Electronically-actuated motors open or close active flaps in the front splitter and on the engine bonnet that steer the air-flow, front and rear.

Utilizing Lamborghini Dinamica Veicolo Attiva 2.0 (LDVA 2.0) with improved inertial sensors that govern all the car’s electronic systems in real time, the ALA 2.0 system flaps are activated in less than 500 milliseconds to ensure the best aerodynamic set-up of the car in every driving condition. When ALA is off, the active flaps are closed, generating the desired high downforce for high speed cornering and full brake conditions. When ALA switches to ‘on’ the front flaps are opened, reducing air pressure on the front spoiler and directing air flow via an inner channel and through the specially-shaped vortex generators on the underside of the car. This drastically reduces drag and optimizes conditions for maximum acceleration and top speed.

When ALA is off the rear flaps are also closed, allowing the rear wing to act as a traditional fixed wing. Stability is enhanced in high speed cornering and full braking by creating maximum vertical downforce. When ALA is ‘on’ the flaps on the engine bonnet open in order to stall the wing for improved drag in high speed conditions.

In addition, the rear wing’s inner air channel is split right and left, allowing aero vectoring for high speed cornering. Depending on the direction of the turn, the LDVA 2.0 instructs ALA to be switched on in either the right or left side of the wing, increasing downforce and traction on the inner wheel and counteracting the load transfer in rolling conditions. This in turn optimizes the chassis’ momentum, requiring a reduced steering angle and improving the car’s overall dynamic stability. The aero vectoring technology in the SVJ has been further developed to improve the aero-loading effects on the inner wheel by 30% compared to the original system.

Engineering technology
The enhanced powertrain features a new titanium intake valve with a new-shape intake runner and length, with a modified intake cylinder head duct for higher flow coefficient. The new, lightweight exhaust system reduces backpressure as well as producing the most emotive sound, and the optimized seven-speed Independent Shifting Road (ISR) gearbox has been calibrated for the car’s increased performance in terms of both power and torque.

The Aventador SVJ’s vertical, lateral and longitudinal dynamics have been re-engineered in LDVA 2.0, with algorithms fully integrated within ALA 2.0 to reflect the exceptional downforce generated and optimize performance: the result of significant R&D investment and collaboration with the CFD team.

This SVJ’s suspension has been reworked, providing higher mechanical and aerodynamic grip. Anti-roll bar stiffness has been improved by 50% compared to the Aventador SV, compensating against roll and improving aero efficiency. A higher damping force range, increased by 15% over the SV, and Lamborghini’s Magneto Rheological Suspension (LMS) has been recalibrated to improve body and wheel control with a focus on track performance.

The Aventador SVJ’s rear-wheel steering (LRS) is further engineered to exploit the aero load in every environment, providing exceptional stability in high speed conditions and improving agility in cornering to enhance average speed in all dynamic conditions.

The Aventador SVJ’s steering has also been developed to provide the feedback demanded in high-performance track and racing environments. The rebalanced power steering reflects the specific aero load and tires, and the Lamborghini Dynamic Steering (LDS) is recalibrated to further improve steering precision and natural feedback.

The Lamborghini SVJ’s four-wheel drive system has improved torque split to maximize traction and agility, with the higher stability of the SVJ allowing a further 3% of torque to be sent to the rear axle compared to the SV. The rear-wheel steering has been developed to further improve the car’s stability while reducing braking distances, particularly in combined braking/turning conditions such as high speed cornering. ESC has been enhanced for improved cornering and driver experience in extreme handling conditions, and ABS has been specifically tuned for the improved grip provided by the tires and ALA system.

New Pirelli P Zero Corsa tires have been specifically developed, according to Lamborghini’s brief for the SVJ: the tires provide higher vertical stiffness to accommodate the SVJ’s higher downforce, as well as provide a high grip level to enhance overall vehicle performance. Featuring a specific tread design, the tires are designed to optimize performance on both road and track. Optional street-legal Pirelli P Zero Trofeo R tires can be mounted specifically for track use.

A driver’s car
The Aventador SVJ is a driver-focused car, developed to maximize the union between driver and car in the most extreme road and track conditions and ensure the most rewarding experience.

With Lamborghini’s three driving modes, STRADA, SPORT and CORSA, as well as the EGO option allowing the driver to further customize his preferences for car set-up, the cockpit features Kombi graphics on the TFT digital dashboard display as well as showing live status of the ALA 2.0 functions.

The Navigation System and Infotainment System including Apple CarPlay come as an option free of charge, allowing the cockpit’s occupants to manage voice activated communications and entertainment from personal Apple devices.

The interior specification of the Aventador SVJ is virtually limitless through Lamborghini’s Ad Personam customization program.

Greatness of Ad Personam
The Ad Personam program provides clients the ability to create their own personal Lamborghini, making it extra special and satisfying every desire. It entails an infinite of potential variations, from the colors to the materials: from the logo on the seat that can be hand-stitched rather than branded, to the initials stitched inside the interior of the car, or even a custom colour, all meeting the company’s exacting standards of quality. Customers could also choose from a variety of material styles, from luxurious Lambo Vintage semi-aniline leathers embellished with other effects and developed together with leading Italian experts, or the innovative Forged Composite material in carbon fiber. 20 July 2020, Automobili Lamborghini has created a new virtual Ad Personam studio, offering consultation sessions to clients worldwide who want to personalize their new Lamborghini without travelling to the Ad Personam specialist department in Sant’Agata Bolognese, Italy. Today, more than 50% of Lamborghini cars coming off the production line feature at least one Ad Personam detail.
Previous
Next
2020-11-02
Automobili Lamborghini and Yohji Yamamot
2020-10-30
The ultra-exclusive Lamborghini Aventado
2020-10-14
Lamborghini FAB Talks on podcast: eight